On the farm’s pond, you’ll see a range of handsome Ducks. 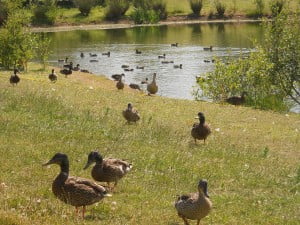 They are Cayuga Ducks an American breed of duck and take their name from Lake Cayuga in the state of New York. Indian Runner Ducks described as the most peculiar duck with a thin neck and long body. In the 1830’s it was commonly called the Penguin Duck. Muscovy Ducks a native to South America and Mexico in particular, Muscovy Ducks have long claws on their feet and a wide flat tail. We also have Swedish Blues and White Pekins.